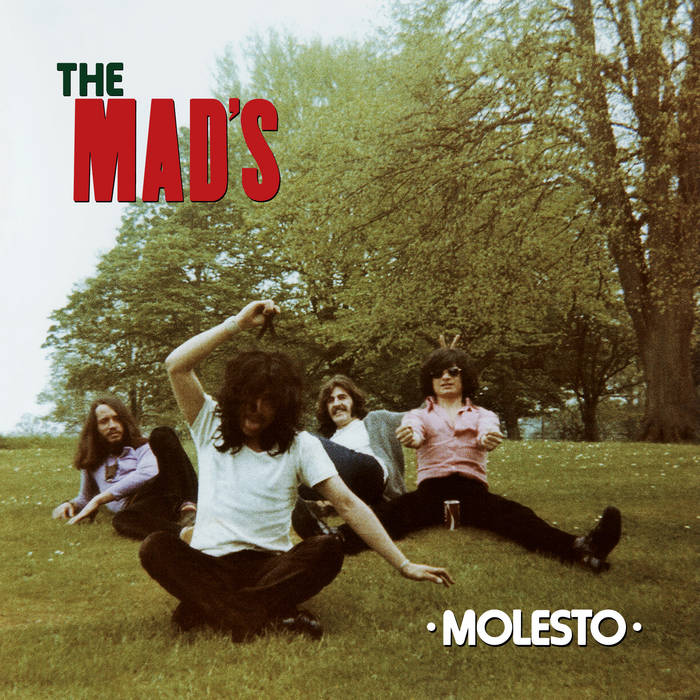 Global Psychedelia This is too good not to buy! If you haven't heard the Mad's, you need to. Great psych music from Lima. (I recommend Tarkus, too.)

Los Mads started out in the mid-1960's, playing covers and a few of their own songs on Peruvian television. But a chance sea-side encounter with Mick Jagger and Keith Richards after a private party got the Mads the chance to go to England; interest from Stones' manager Marshall Chess got them backstage to see Hendrix at the Isle of Wight—and recording time in the Rolling Stones studio.

Some demos recorded there and at Jagger's Stargroves castle (recorded live to studio truck, just like Led Zeppelin did for their third and fourth albums, Deep Purple's 'In rock' and 'Machine head', the Rolling Stones 'Sticky fingers', 'Exile on Main St.' and many others ) plus a name change to Molesto got them gigs at the main venues in London. They jammed with Steve Winwood and Brian Davison (The Nice); they played with Jeff Beck and Carmine Appice; Molesto's guitar player, Alex Ventura, worked in a clothing boutique alongside Freddie Mercury and Roger Taylor. They were in the musical heart of England. And at that point, faced with growing friction within the group, Molesto disbanded.

This disc collects recordings from all three stages of Los Mads/The Mads/Molesto's six year career, including two tracks from the Stargroves session. The early tracks are groovy post Summer of Love stuff: 'Birds in My Tree' is a musical creamsicle, just right for summer nights. The excellent eight plus minute instrumental 'Tumor Bossa' has a Santana-esque feel. But the flamethrower guitar on Molesto tracks like 'Feels Like Love' and 'Fly Away' (which luckily clocks in at more than seven minutes) needs to be heard to be believed. Hard driving and heavy; wild, fast, rhythmic, and furious: top of the table stuff. Most tracks are sung in English.

All tracks exclusive licensed by Alex Ventura (The Mad's / Moleto) to Repsychled Records.